Spudnut Recipe and The Spudnut Shop in Vernon B.C. 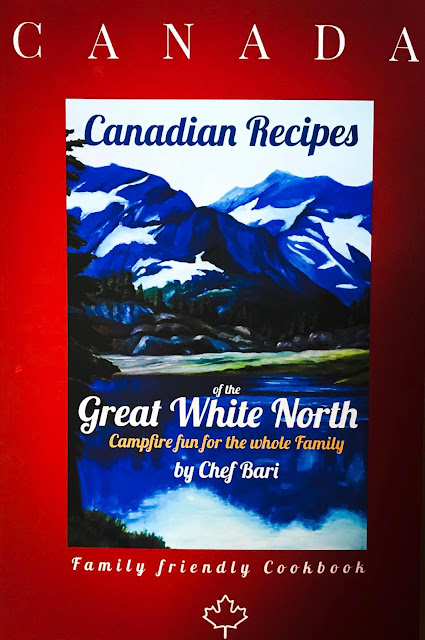 When I was ten years old my parents decided to buy a Spudnut Shop in Vernon,B.C., Canada during the summer of 1967.

It turns out to be the biggest experience of my life, due to the Spudnuts themselves. I had never tasted such a tasty [donuts] in my life, as these particular [donuts] were not donuts at all, but a Spudnut - a special brand of potato flour mix by a franchise that originated in Salt Lake City, Utah.


The original recipe of Spudnut come from the two brothers -where Bob and Al Pelton in Salt Lake City began the historical adventure of turning [donuts] into something better – Spudnut – a potato flour ingredient with the use of yeast, pure vegetable shortening and certain spices.

Be sure to check out a great little short story called : The Great Spudnut 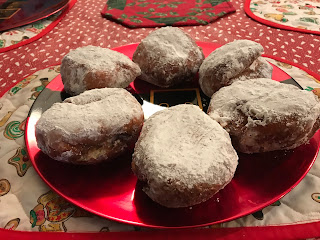 As said, the Spudnuts started with a Spudnut flour mix originated by two ingenious brothers in Salt Lake City. After months of experimentation, they came up with the prefect mix. After perfecting the Spudnut Flour Mix, just like that they became a household name in United States, growing so fast that their next solution was to start a special franchise in Salt Lake City. The brothers had grown from a small Spudnut shop to a large growing enterprise with a warehouse and mixing plant. It has been told that you could buy a Spudnut franchise in 1950’s for only $2000.00. Apparently in order to provide orders to the East of United States they decided to open up a warehouse in Cleveland Ohio. But, my mom says that their orders came directly from Salt Lake City, Utah. Once we had to buy directly from Calgary, Alberta.  I still remember that quick unexpected trip on Sunday.  Needed the potato flour for that Monday morning. 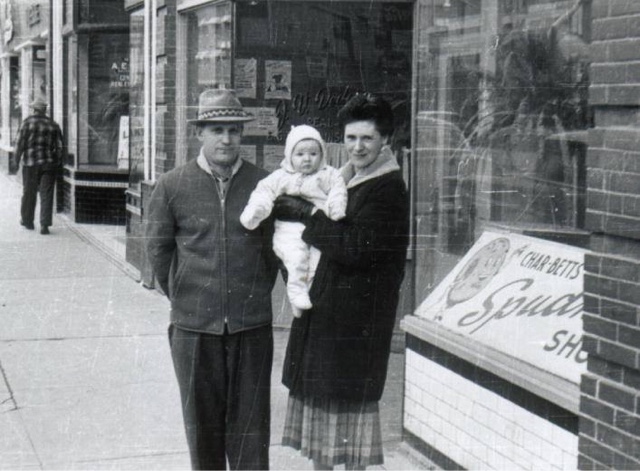 Photo is courtesy of Eileen Podanowski.  Eileen here, in the photo is a baby at the time (1961) and her mom and dad are posing in front of the Spudnut Shop my parents owned from 1967.  Thank you Eileen for this wonderful photo.  You can see the glass window where my dad would showcase, making the Spudnuts, so everyone could watch.

With the Spudnut Franchise, you had to order 100 lb bags of 10 [Spudnut mix]per week, which was shipped and delivered to Vancouver,B.C. or Calgary, Alberta, Canada for $75.00 per bag.

The cost of a signal Spudnut was .010 cents each or $1.20 per dozen in 1968. My mom, Betty Watts reminded me that Long johns ( a long style Spudnut with chocolate glaze) and jelly filled Spudnuts cost a whole 0.15 cents per Spudnut. Coffee at the time was only 0.10 cents while tea was 0.15 cents. All the prices of the Spudnuts was placed on a green chalk board.  My mom would write down the daily specials and the elusive Spudnut special price.

In the small town of Vernon, the Spudnut Shop was originally owned by hard working Ernie and Betty LeClair. They placed the shop over to their daughter and husband team – Pearl and John Lehr.
As of 1968, my mom Betty Watts was in full control of the Spudnut Shop and this is when we began our "Spudnut Adventure".  Before that, in 1967, I believe John was helping out, to make sure the Spudnut recipe was done right.  It's like handing the keys over to your son or daughter, the first solo trip with the car. 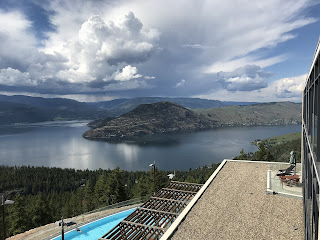 And what an adventure!

My mom opened the little Spudnut Shop on main street of Vernon, at 6:00 am and closed the shop around 5:00 pm.; or when the last customer decided to finish off another tasty Spudnut.  My dad would be up around 3:00 am to begin making the first patch of Spudnuts.  I believe he made 3-4 patches per day.

Long days at six days a week, starting with making the elusive Spudnut at 3:00 am from mixing it to rolling it out, to making the round shape of the Spudnut. It was then placed in a warming rising oven [PROOFER : long rectangular oven with room for baking sheet racks and a small water base container at the bottom] at a temperature of 190 degrees F. until the Spudnuts raised twice to three times the original size.

I tried to help my mom the best I could at such a young age of 10 yrs old, but mostly I ended up eating the profits of fresh Spudnuts and those tasty homemade hamburgers. My mom is now in her eighties, but we still reminisce about the Spudnut Shop days.

It's my hope you will enjoy working with the recipe below. Please note: Moderate Skill Level due to the steps required.

Ingredients:
1 1/2 packages of fast rising fleischmann's yeast. ( Use 2 packages if your product has past the before date. Just saying.
1/2 cup of warm water
2 1/2 cups (dry measure) white all purpose flour
1/2 cup Organic Potato Flour (organic potato flour is found in the specialty section of your supermarket)
1/2 teaspoon of salt
1/4 cup of  Crisco Shortening or butter ( butter will make it richer, but the Spudnut will be darker ) (My parent’s Spudnut franchise used Crisco Shortening and it had a lighter tone after deep frying it. )
1 large egg and 1 yoke ( if small eggs use two)
1/4 cup sugar
1 cup of lukewarm milk - split half a cup of milk in order to alternate from the dry ingredients to the wet ingredients, respectively

1. Sift dry ingredients together in a medium bowl, add salt too - mix in.

2 . Mix Yeast Fleischmann's Yeast into half cup of warm water.

3. Place butter in mixer and mix. Add sugar and mix until a fluffy cream mixture. Add egg with yoke.

5. Add only half a cup of the lukewarm milk until.   ( Change over to dough hook )

7. Incorporate with the last of the milk ( 1/2 cup) and the dry ingredients until all incorporated together.

Your finish dough product should be like Bread dough.

1. Remove dough from mixer and place onto floured surface. Roll into a large ball. Lightly oil ball with canola oil.
2. Place into a lightly oiled bowl,and cover with dry cloth. Place in  a warm spot.
3. Let rise for 1 hour or longer in warm place. ( It should double in size.)

1. Place dough on floured surface.
2. Begin rolling out the dough.  You can flip it again to get traction on surface. ( 1/4 to 1/2 inch thick)
3. Cut into round donut shapes with cutter.
5. Pace on baking sheet and COVER with dry cloth and let it rise again for 30 minutes in  warm area.

BELOW PHOTO:  The photo shows us cutting into formed Spudnuts 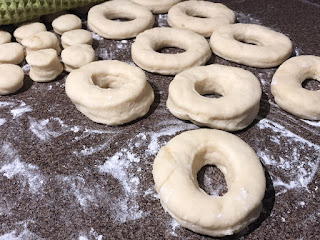 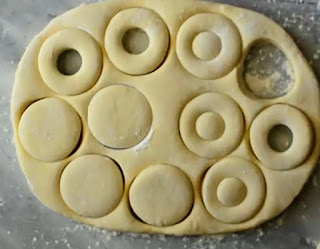 Third : Drop 3 Spudnuts into deep fryer. Cook until light golden brown. Flip over to cook the remaining side.

Remove and place on paper towels.  Dip into sugar  glacé ( I like dividing it up evenly and add chocolate syrup to one. Just to switch it up, plus I love chocolate)

I love the new Cool Touch Fryers from Costco - $145 for one of these babies . 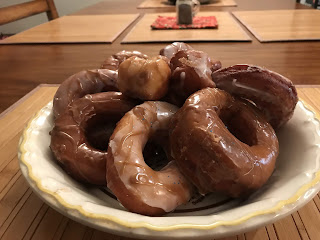 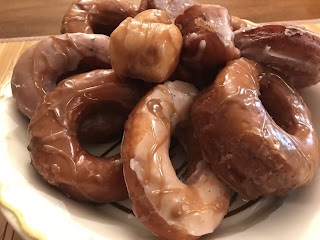 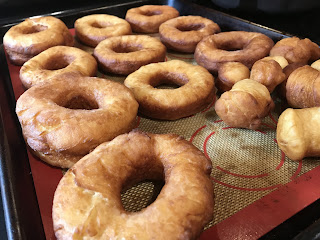 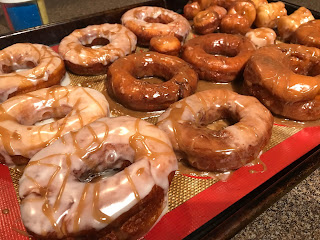 You can add sugar cinnamon mixture to the Spudnuts or use my Icing Sugar Glaze.  See Recipe below.

Making Spudnuts is a moderate level of experience. Don't attempt this if you've have never cooked before.
Please support my efforts by purchasing my Cookbook : Canadian Recipes of the Great White North.

Check out my website Chef Bari for recipes and  my Facebook page: Canadian Recipes of the Great White North

Good Monday Morning everyone.  Throughout the internet we have a collection of Spudnut Clone Recipes  with their spin on the recipe. If you would like to participate and have a reciprocal link to each of our websites - I would be happy to add on. 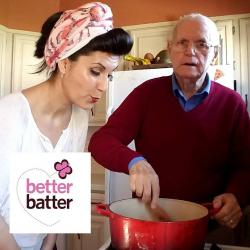 This morning I would like to introduce NAOMI from BETTER BATTER : Naomi has graciously credited me for the original Spudnut Recipe, as well as, added the link to my website. She has also prepared a Spudnut Clone Recipe - Be sure to checkout her recipe and recipes as well.

Thank you Naomi for participating and sharing links with each others website. Much appreciated.

Be a part of the Spudnut group by sharing your clone too! I love to see your version.

In the next week I'm going to add new photos and a video showing step by step instructions on making the original Spudnut Recipe. Please stayed tuned. It might take 10 days to get organized, as we Chefs are pretty busy.

It's was a blessing to be contacted by Deb Anderson, the daughter of the original owners Al Pelton. Thank you for contacting me.

P.S. I hope everyone is using Potato flour and not starch - VERY IMPORTANT

Please take a minute to support my efforts by buying my published cookbook - Canadian Recipes of the Great White North - CLICK ON PHOTO below.

UPDATE : 2016 -  Unfortunately my mom passed away after her fight with cancer on June 2015.  Loved by all throughout BC and Alberta.  She so loved Vernon, BC.  Her last days were with her family and friends, including three grandchildren.  She use to attend the BC Hydro social meetings with her friends, I believe every month.  Her last year's with second husband, Peter Watts, was said to be the golden years of her life.  I'll will sure miss my mom. RIP. Love Bari

Method:
Mix together - Add more milk to make runner if required - but this works for me.

If you make a comment, please allow for moderation. Thank you in advance for your support.

Good Afternoon !  So - What's for Dinner tonight?  How about French Onion Soup?  It's quick and extremely easy from ... 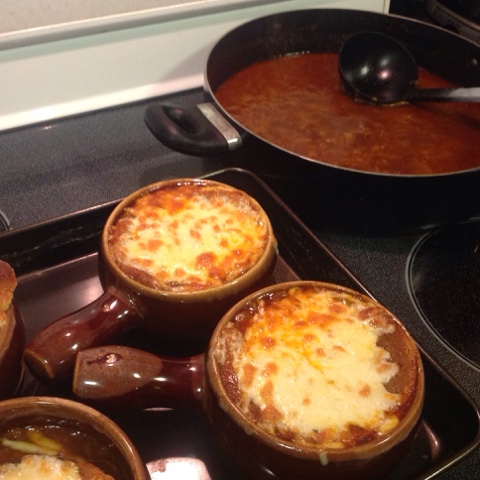